United States started with the arrival of Native Americans in North America around 15,000 BC. Numerous indigenous cultures formed, and many disappeared in the 1500s. In 1776, in Philadelphia, the Second Continental Congress declared the independence of the colonies as the “United States”.

The country began as 13 colonies of England, which were spread out along the central Atlantic Coast of North America. More than 40 years passed before the colonies joined together, rebelled against England, and declared themselves free, independent states on July 4, 1776, in the famous Declaration of Independence. 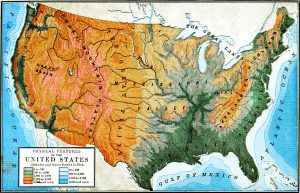 The U.S. borders both the North Atlantic and North Pacific Oceans and is bordered by Canada and Mexico. It is the third-largest country in the world by area and has a varied topography. The eastern regions consist of hills and low mountains, while the central interior is a vast plain (called the Great Plains region). The west has high rugged mountain ranges (some of which are volcanic in the Pacific Northwest). Alaska also features rugged mountains as well as river valleys. Hawaii’s landscape varies but is dominated by volcanic topography.

Like its topography, the climate of the U.S. also varies depending on location. It is considered mostly temperate but is tropical in Hawaii and Florida, arctic in Alaska, semiarid in the plains west of the Mississippi River and arid in the Great Basin of the southwest.